The art form known as Shibayama become very popular with the feudal daimyo lords and the wealthy merchants during the rule of Tokugawa Ienari (1773-1841) the eleventh shōgun of the Tokugawa shogunate of Japan.

A great variety of materials were used, including mother-of-pearl, tortoiseshell, abalone, coconut shell, bone, ivory, horn, amber and coral. This highly-skilled work required the meticulous carving of very small fragments, which were then patiently inlaid into a gold lacquer, wood or ivory base.

Just as in a jigsaw puzzle these pieces ultimately formed a complete scene. The subjects chosen for these decorations were predominantly landscapes, flora, fauna, mythological figures or scenes from traditional Japanese life. 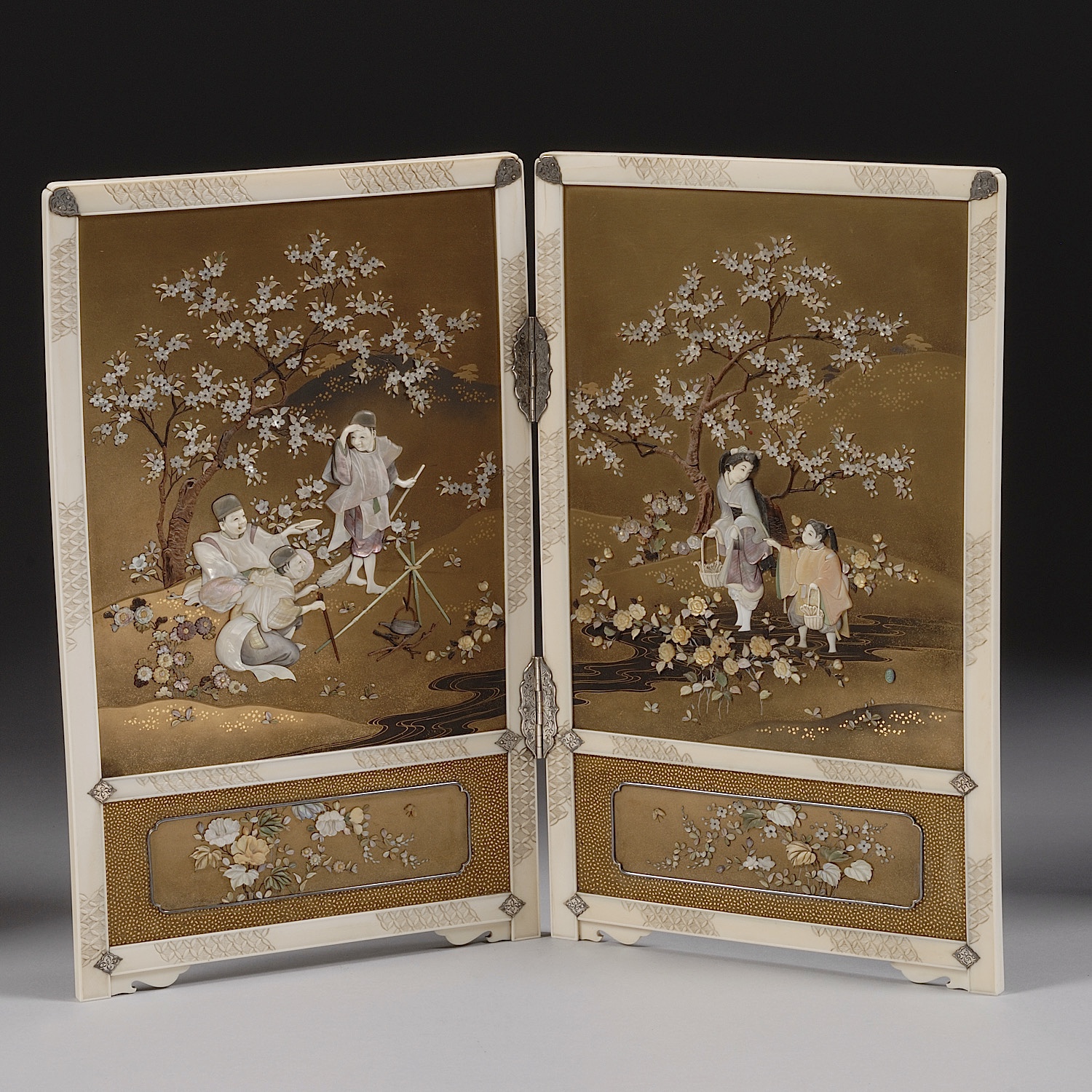 The lacquer techniques are:

Togidashi研ぎ出し a lacquer technique where the hiramakie design is made visible by repeated coating and polishing.

Hiramakie平蒔絵  a flat sprinkled lacquer technique where the design is raised above the ground only by the thickness of its coats of lacquer.

Kinji金地  a lacquer ground with sprinkled gold powder, which has been polished to a high gloss finish. 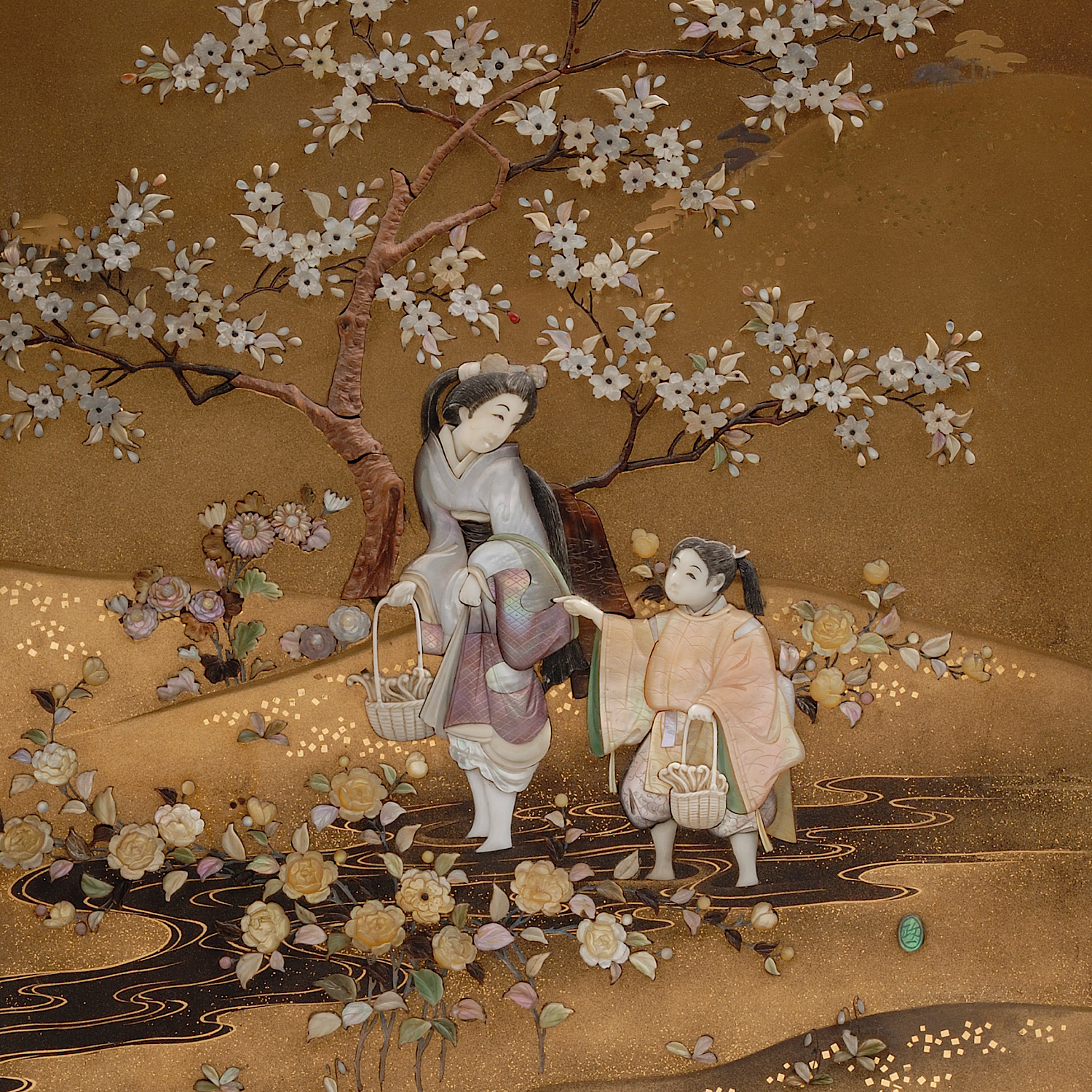 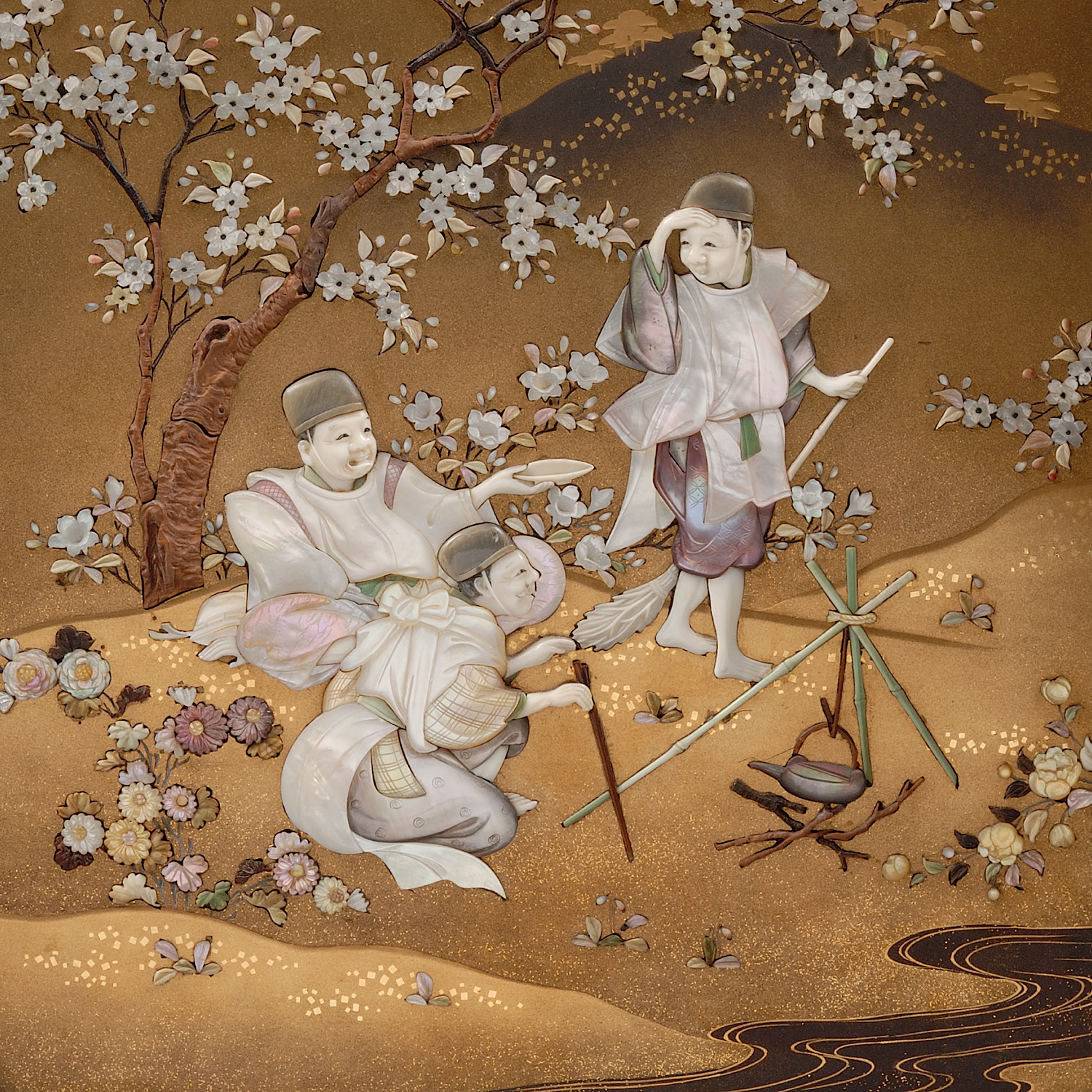 This decorative style of Shibayama inlaid work was started by Ōnogi Senzō (1775-1836) 大野木仙蔵 who was from the town of Shibayama in the Shimosa Province in the An’ei era (1772-1781).

He was from a farming family, and in order to further his artistic career, Senzō moved to the capital Edo, and adopted the name of his home town Shibayama to his surname (Shibayama Senzō).

Shibayama Senzō I is credited with founding the Shibayama School and had many followers.

In 1867 at the Paris Exposition Universelle many Shibayama works were exhibited and proved extremely popular with Westerners who visited the exposition.

During the Meiji period (1868-1912) the fascination with these exotic objects started a fashion for Shibayama lacquer objects and craftsmen did predominantly cater to a Western clientele.

Today the popularity of Shibayama works continues and is a very strong collecting field. 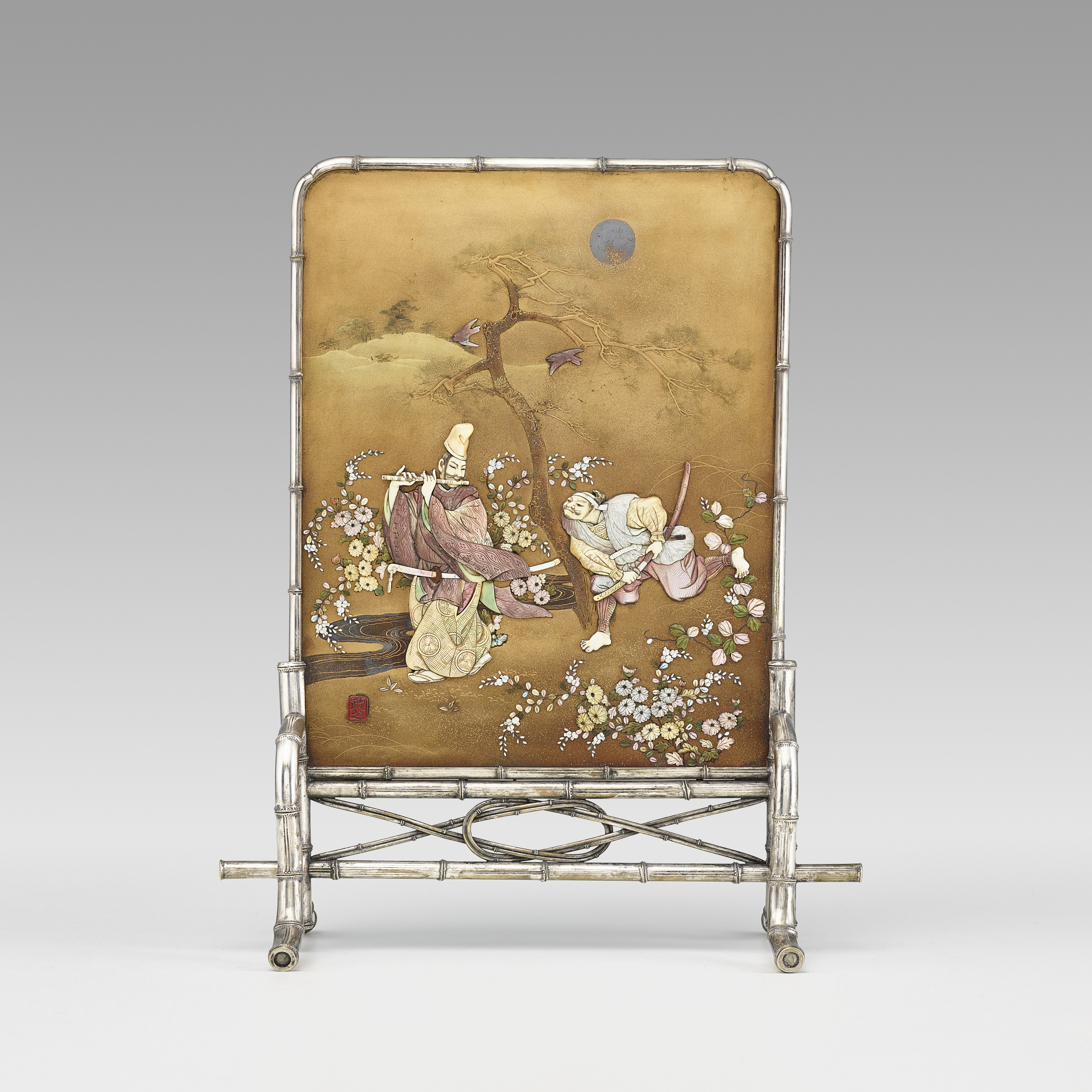 Fujwara no Yasumasa was a noble at the Heian Court (958-1036) celebrated for his poetry and artistry on the flute.
Legend says that on a moonlight night when Yasumasa was playing his flute, the villain Hakamadare was laying in wait, intending to kill him.But he was so overcome by the beautiful music, that he was unable to draw his sword against Yasumasa. 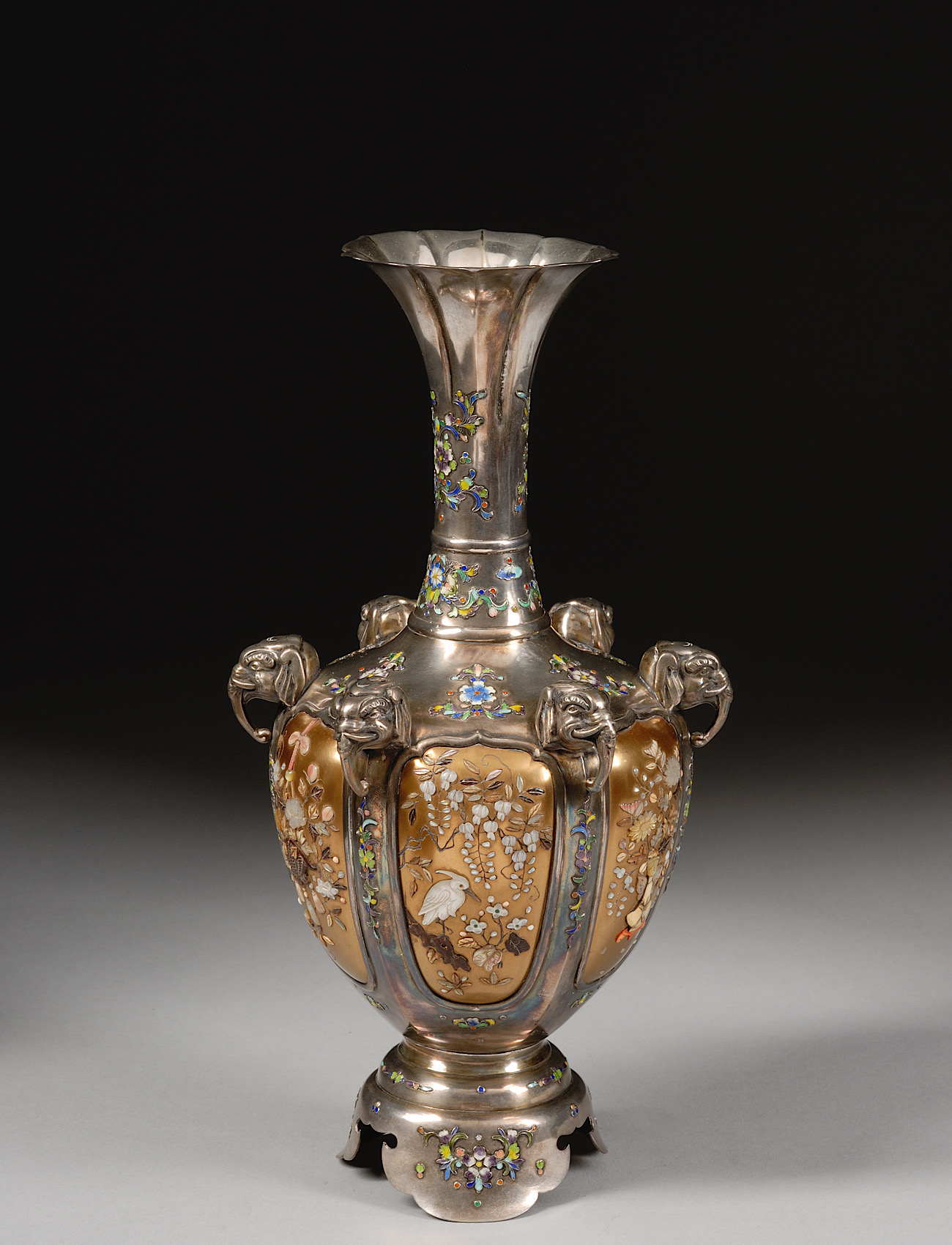 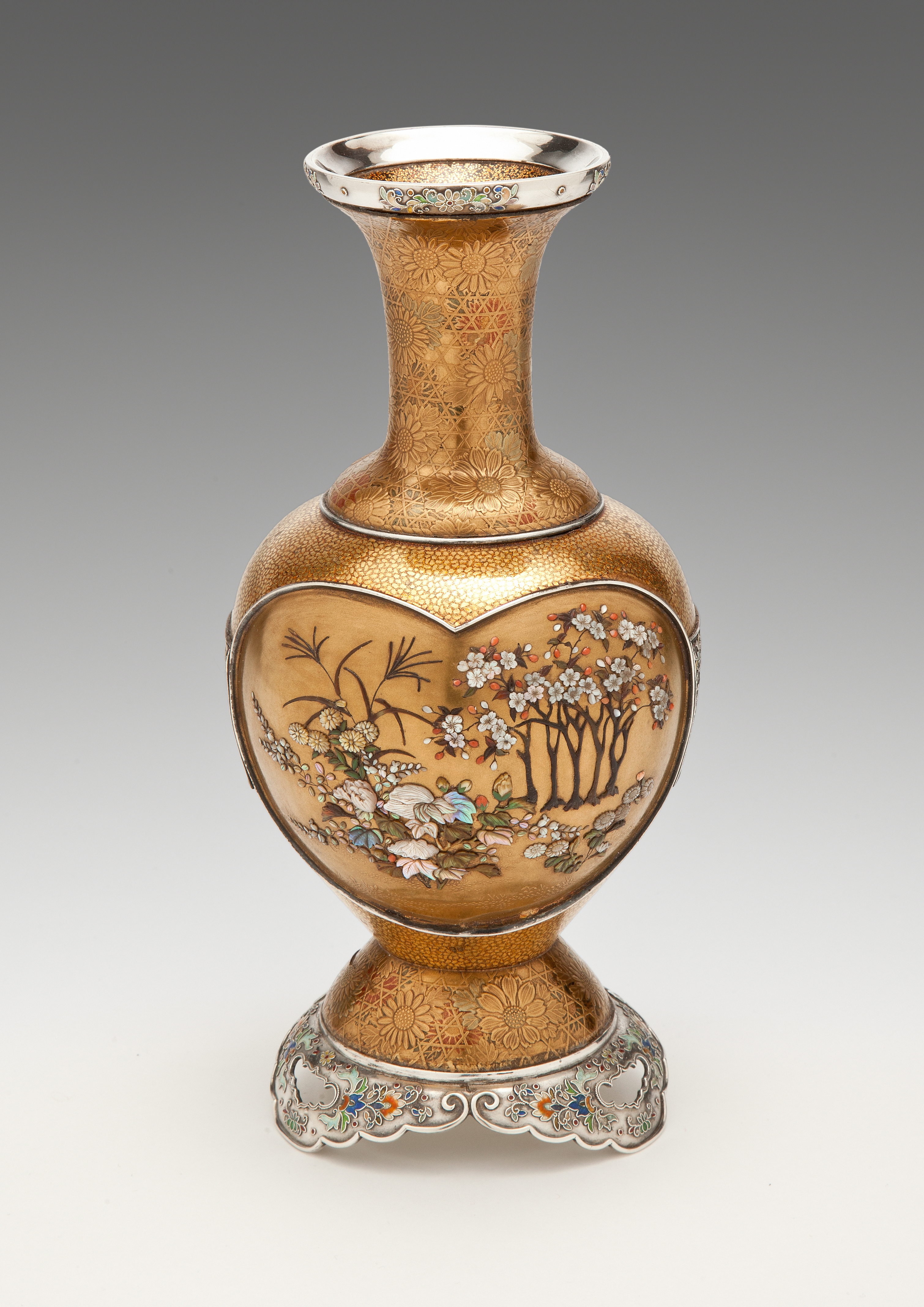 Provenance: This piece was in the Collection assembled over 40 years by the Chinese painter Mr. Lű Xiaguang (1906-1994). He settled in Paris at age 24 during the 1930's with his friend Wu Zuoren, both pupils of Xu Beihong the famous painter known for his Chinese ink paintings of horses and birds, and studied at the Beaux-Arts here and in Brussel. He returned to China in 1936 to join the Kuomintang, the Chinese National People's Party, which used his talent for the war propaganda, rising through the ranks as general in the Chang Kai-Check army during the Sino-Japanese conflict in 1937.
In 1946 he returned to France and resumed his painting career and as an Art's dealer until his death in 1994. He exhibited at the Biennale des Antiquaires in the 1960's, and together with his wife in the 1980's sponsored many Chinese artists to study in Paris by establishing a studio for the National Chinese Artists Association.
In 1993 he gifted to the Zhejiang Province Museum in Hangzou part of his Chinese and European paintings collection, notably paintings of his contemporaries Qi Baishi, Wu Zuoren and his teacher Xu Beihong.

Laura Bordignon is the author of ‘The Golden Age of Japanese Okimono’ (Antique Collectors’ Club 2010) an essential reference work for collectors, connoisseurs, dealers and scholars alike.