During the Meiji era the textile firms in Kyoto who previously mainly produced kimono and temples garments, underwent significant changes due to the modernisation policies of the new Meiji government.

They started to cater for a Western export market manufacturing extremely fine ornamental textiles art for interiors such as silk embroidery pictures, screens, drapery and wall hangings which were imported through dealers and shops like Libertys in London.

Silk pictures were often based on actual paintings but delicately embroidered with fine stitches techniques to create a great visual effect and also using layers and texture to create a sense of depth, which from a distance and to the untrained eye appear like paintings. 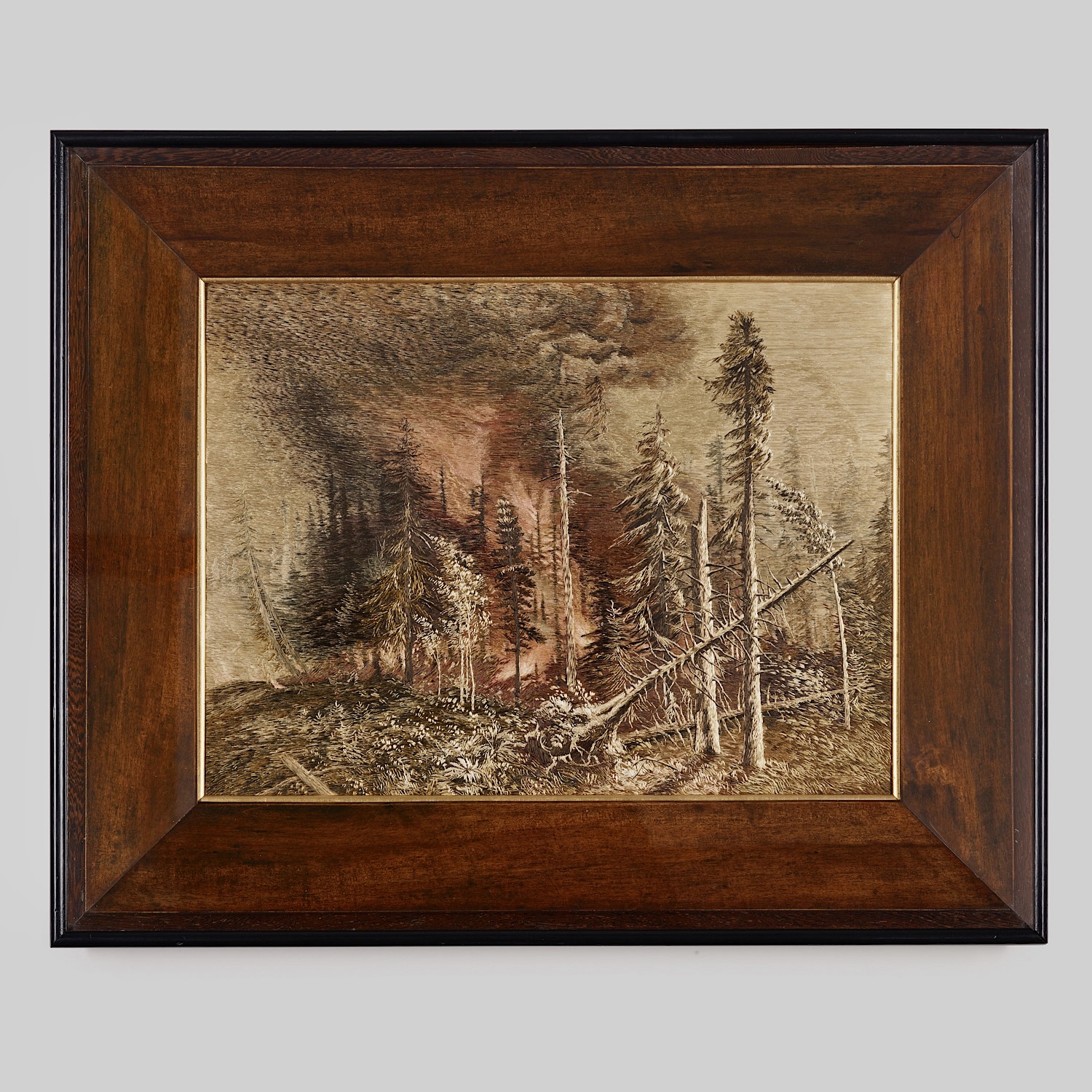 A three-dimensional technique known as Oshi-e 押絵 (lit. means pressed picture) also known as kiritori zaiku was a technique in which pieces were cut from an original drawing and transferred onto thick paper. These forms were covered with brocade, damask, silk or crepe pasted onto a background and then filled with paper or silk wadding to create a padded relief effect. Also very fine silver and gold threads were used to embellish the design. Only few recorded examples of this art survive today.

This technique probably dates back to the Muromachi period (1392-1573) and started in Kyoto among aristocratic ladies and later spreading into Japanese society. This type of work was very time-consuming requiring lots of fine details to the dresses, faces and background within the setting. It was considered a lady’s accomplishment alongside embroidery, ikebana and the tea ceremony.

This art genre was displayed in the 'Fancy Articles' section of the Philadelphia Centennial Exhibition of 1876. In 1929 it was also described in the published ghost story ‘The man who travelled with an Oshi-e’ by the writer Edogawa Ranpo. 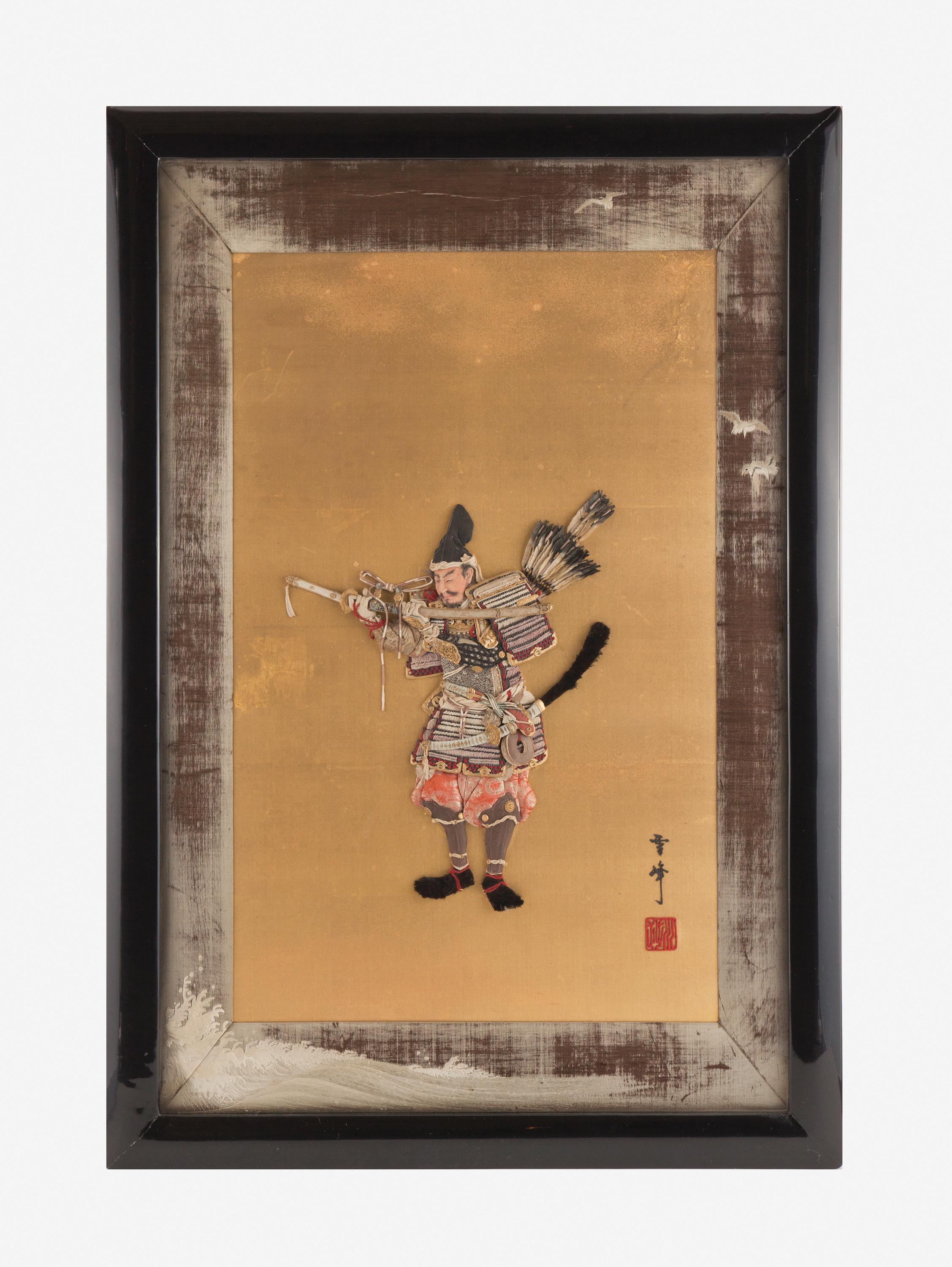 Nitta Yoshisada was from the Minatomo clan and lived in the 14thC. He was ordered by the Emperor Go-Daigo to attack the rival Hōjō clan at the city of Kamakura which was surrounded by steep hills making an army assault very difficult. He was blocked by the rival clan at the Gokurakuji Pass and took the decision to lead his army by sea at Sagami Bay at low tide.

He then threw his sword into the waves and offered it to the Sea God who parted the waters. The city was taken and the Hōjō clan defeated.

There are two examples by the artist Seppō in the 2012 Ashmolean Exhibition Catalogue in Oxford ‘Threads of silk and gold, Textiles from Meiji Japan’ by C. Pollard and H.T. McDermott, pg. 178-180.

Another type of ornamental silk pictures were Yūzen-Birodo cut velvets invented in 1868 by the leading textile firm Nishimura Sōzaemon 西村総左衛門 in Kyoto.

The velvet was woven by passing the threads over fine metal wires parallel to the woof and then cut to form the pile. The precise cutting would achieve a chiaroscuro three-dimensional effect.

The first example of Yūzen-Birodo 天鵝絨 was exhibited at the Second National Industrial Exhibition in Tokyo in 1881. 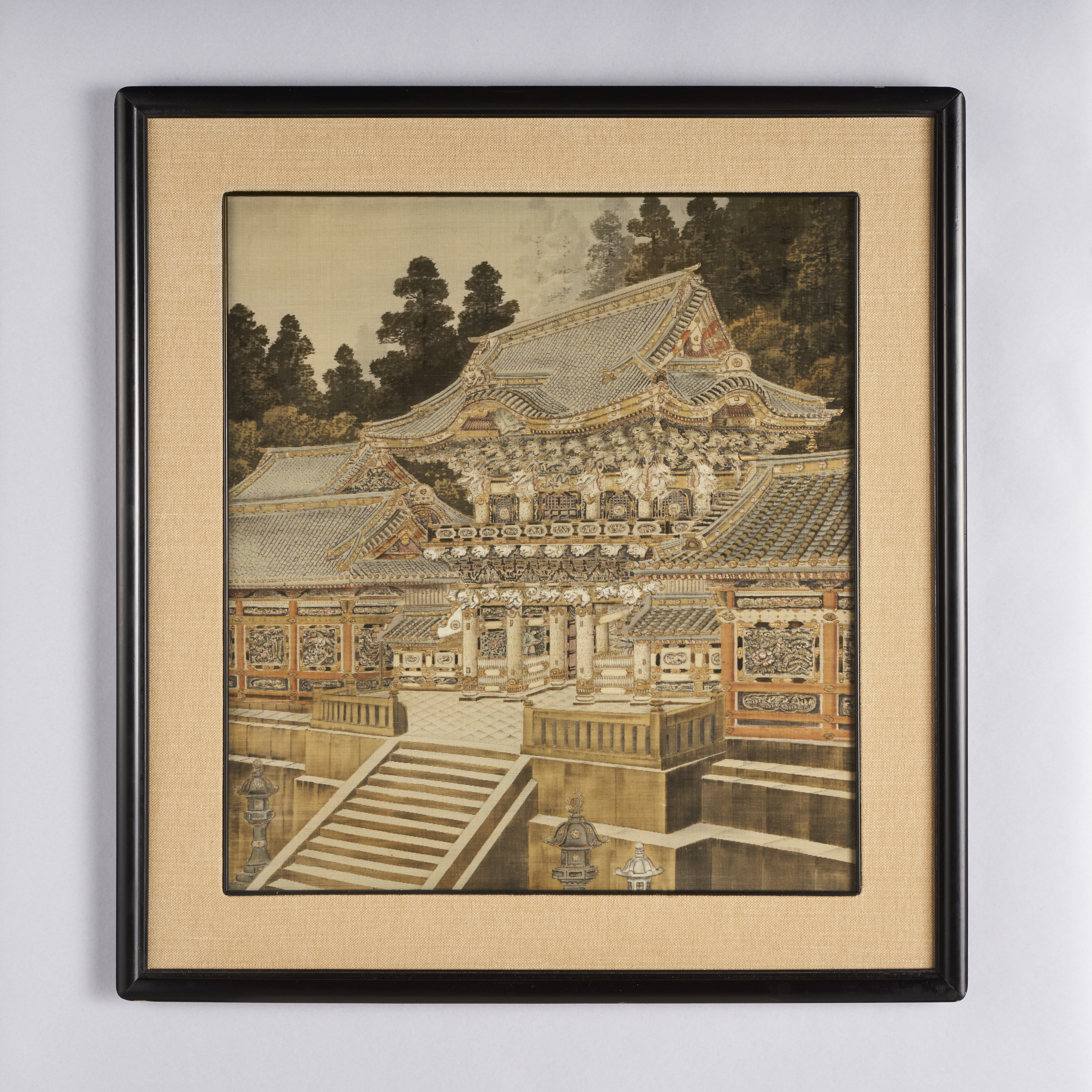 The Shrine is located in Nikkō, Tochigi Prefecture and is a UNESCO World heritage site, and was a very popular destinations for foreign visitors since the 1870’s.

Today the Nishimura Sōzaemon house is better known as with its trade name Chisō Co. Ltd. one of Japan’s oldest businesses first founded in the middle of the 16th century.

Another leading producer of textiles based in Kyoto was the Iida Company founded in 1837 under the name of ‘Takashimaya’ by Mr. Shinshichi Iida.

It started as a retail store but as the country opened to foreign trade, the firm was granted in 1879 the manufacturing and wholesale license for silk textiles and grew by establishing the export, import and retail with large branches in various cities at home in Osaka, Yokohama, Fukui, Tokyo and Kobe and abroad in London and Lyon.

Around the 1880’s they became a leading player to rival the Nishimura Company and were recognised at the World Expositions by winning many medals and awards. In 1893 at the Chicago World’s Fair, in 1889 and 1900 at the Paris World’s Fair and in 1904 at the St. Louis Exposition to name a few. 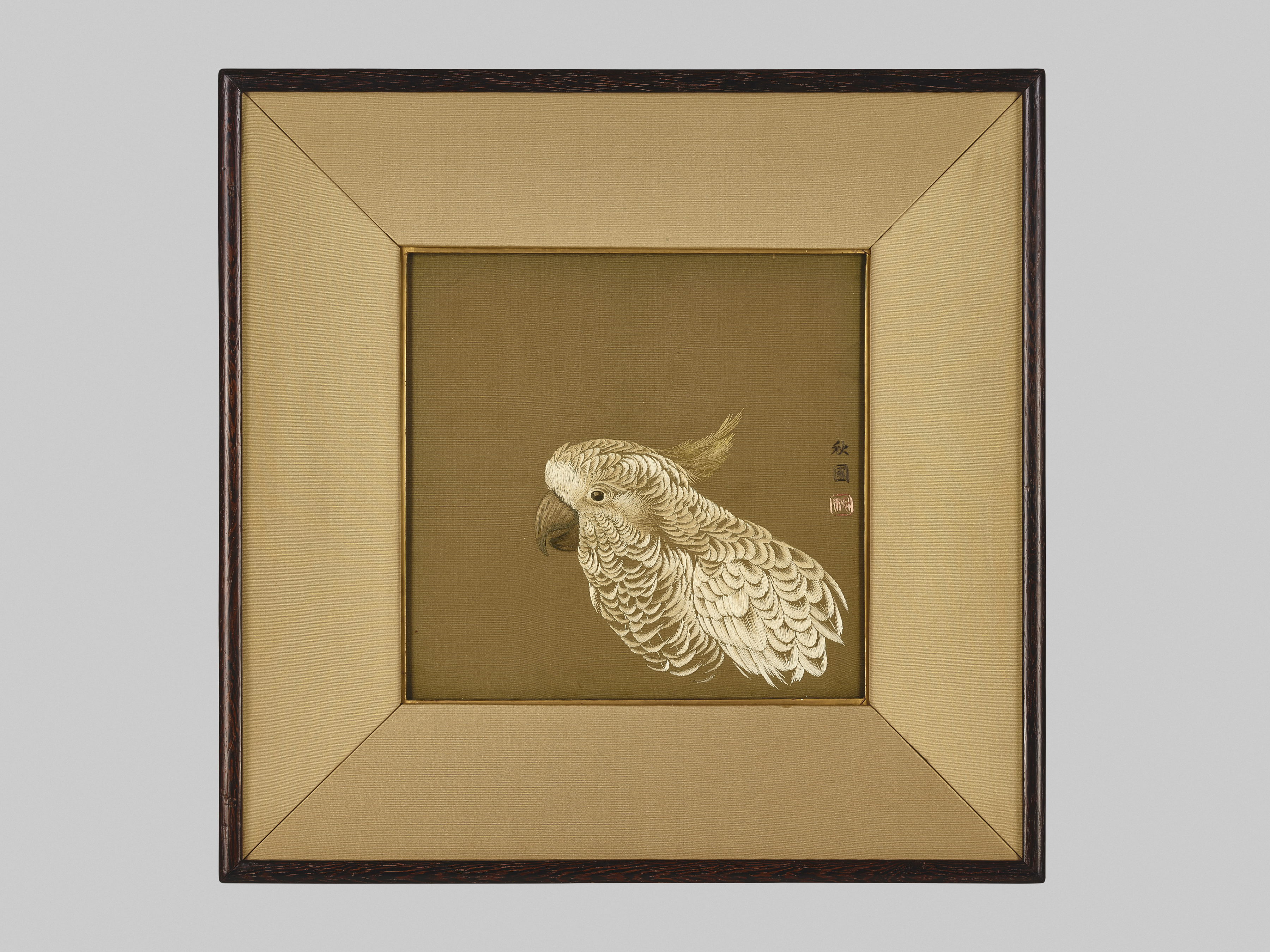 The Iida Company received orders for the Imperial palace and were later honoured as the official manufacturers to the Imperial household.

Japanese embroidery and textiles art were highly regarded at the time of the international exhibitions and greatly contributed to the advancement of the textile industry.

The growing popularity of these delicate and beautiful artefacts is a testament to the extraordinary Japanese craftsmanship and an important legacy for the artists who devoted themselves to this craft.

Today many people appreciate and enjoy owning these Japanese silk textiles from the Meiji period, and you can also see them up close displayed in various museums all around the world.

Laura Bordignon is the author of “The Golden Age of Japanese Okimono” (Antique Collectors’ Club 2010) an essential reference work for collectors, connoisseurs, dealers and scholars alike.