During the Japanese feudal era the Samurai (bushi lit.warrior) was a class of highly trained and skilled warriors in martial arts.

Their ethos embodied a code of honour and loyalty the bushidō (way of the warrior) where a Samurai will fight to the bitter end for his master, the only option in case of a dishonourable defeat was to commit seppuku a ritualized suicide through self disembowelment by plunging a sword into the abdomen.

The Samurai wore two swords, the katana over 24 inches (61cm) long and the shorter wakizashi between 12-24 inches (30-61cm) long. In battle they protected themselves with intricate iron or leather body armour’s plates and a helmet (kabuto) lavishly decorated; to keep the head cool a circle of hair above the forehead was shaved, but the habit of wearing the remaining hair in a top-knot continued until it became legally prohibited in 1871.

Other weapons used were the naginata (pole weapon with a curved blade) and the yari (spear).
Samurai were also accomplished archers fighting on horseback with a long bow (yumi). 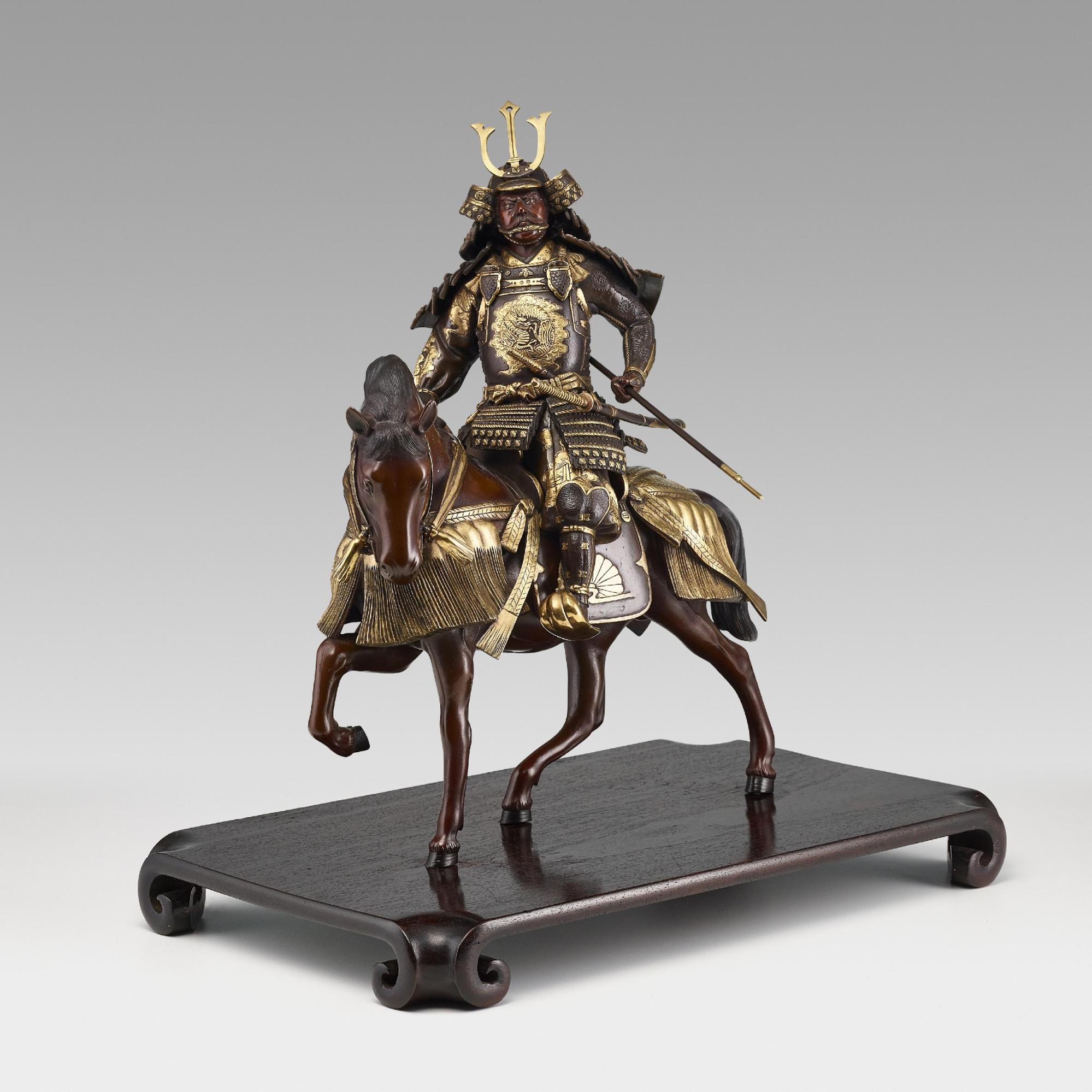 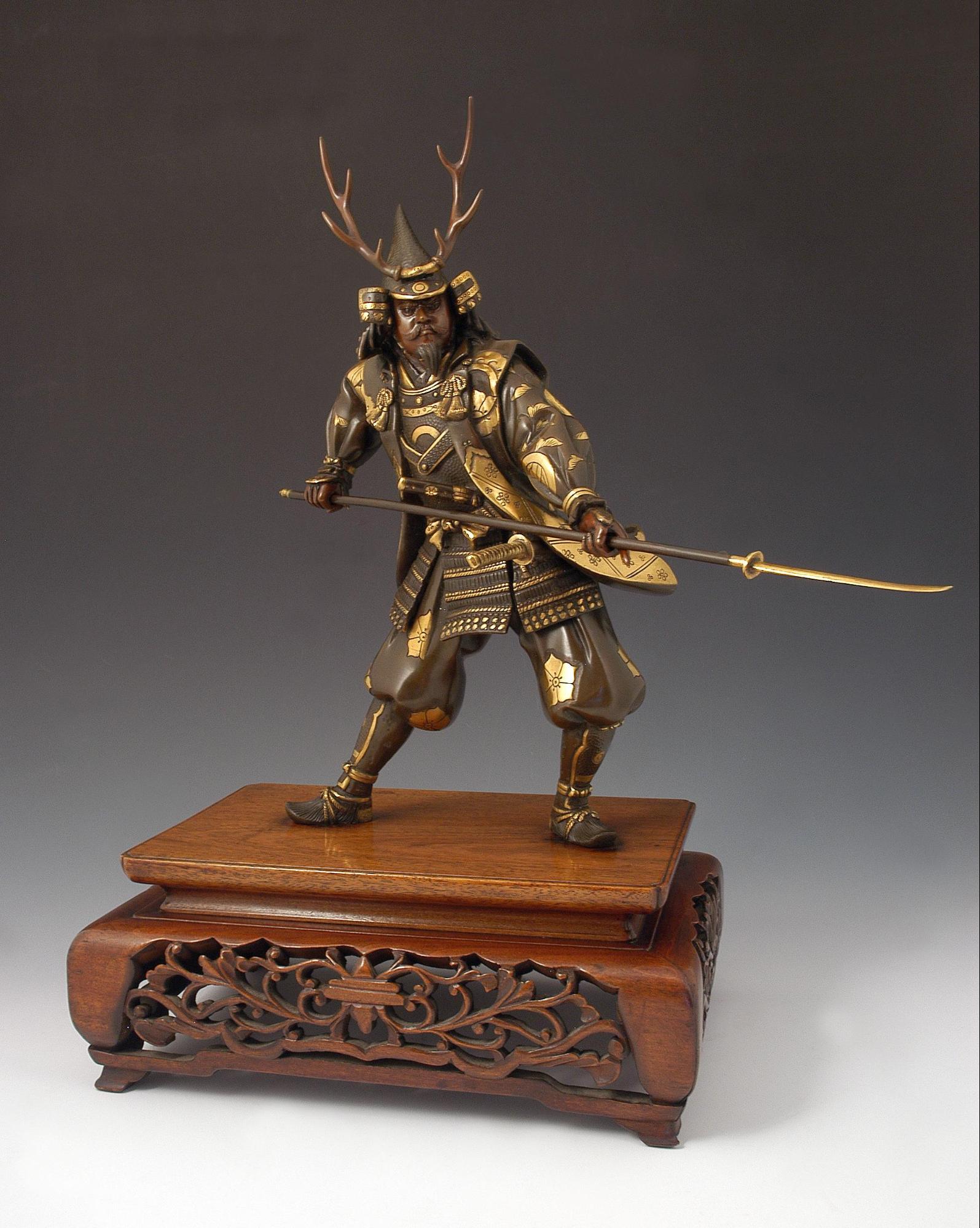 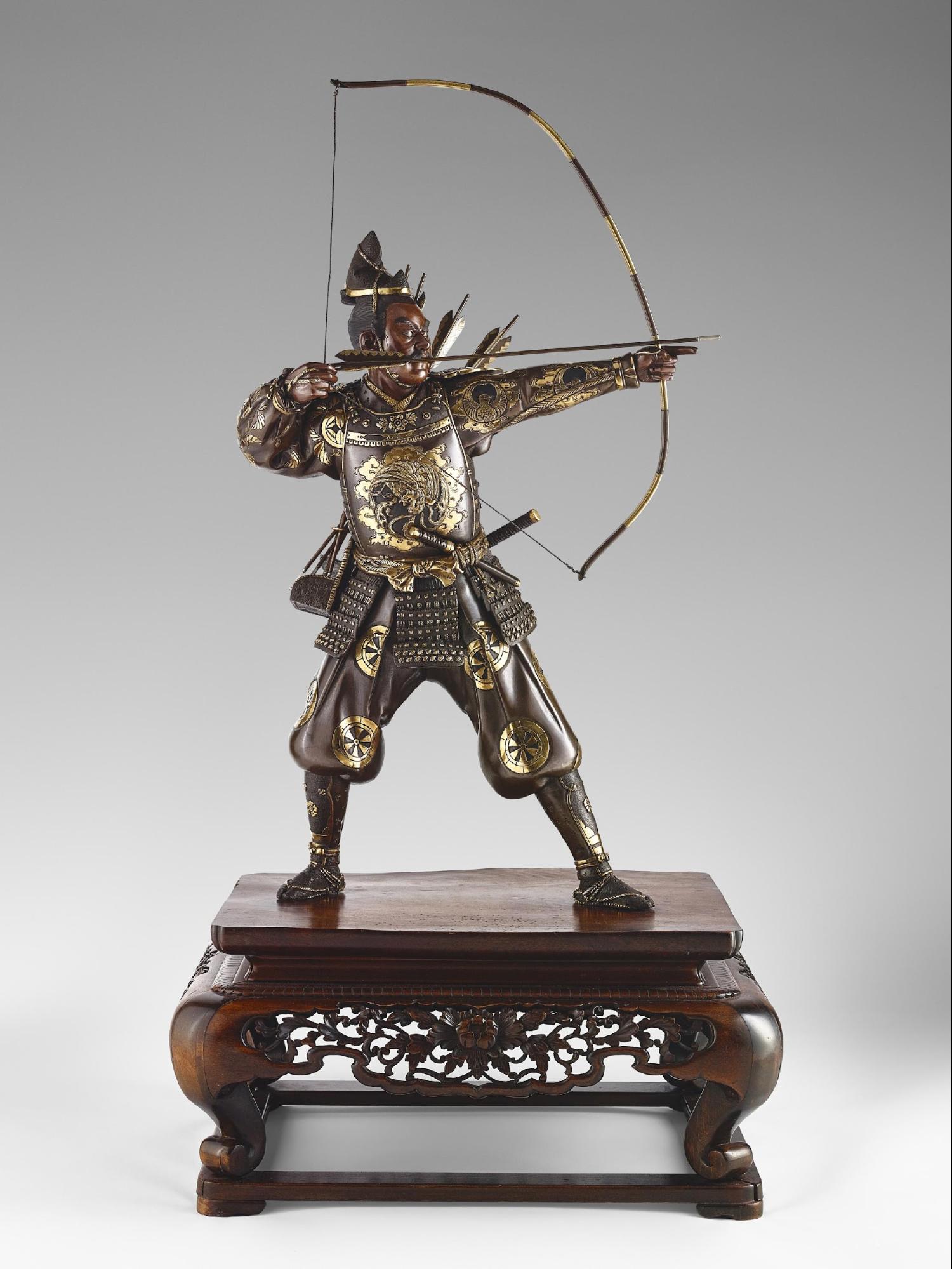 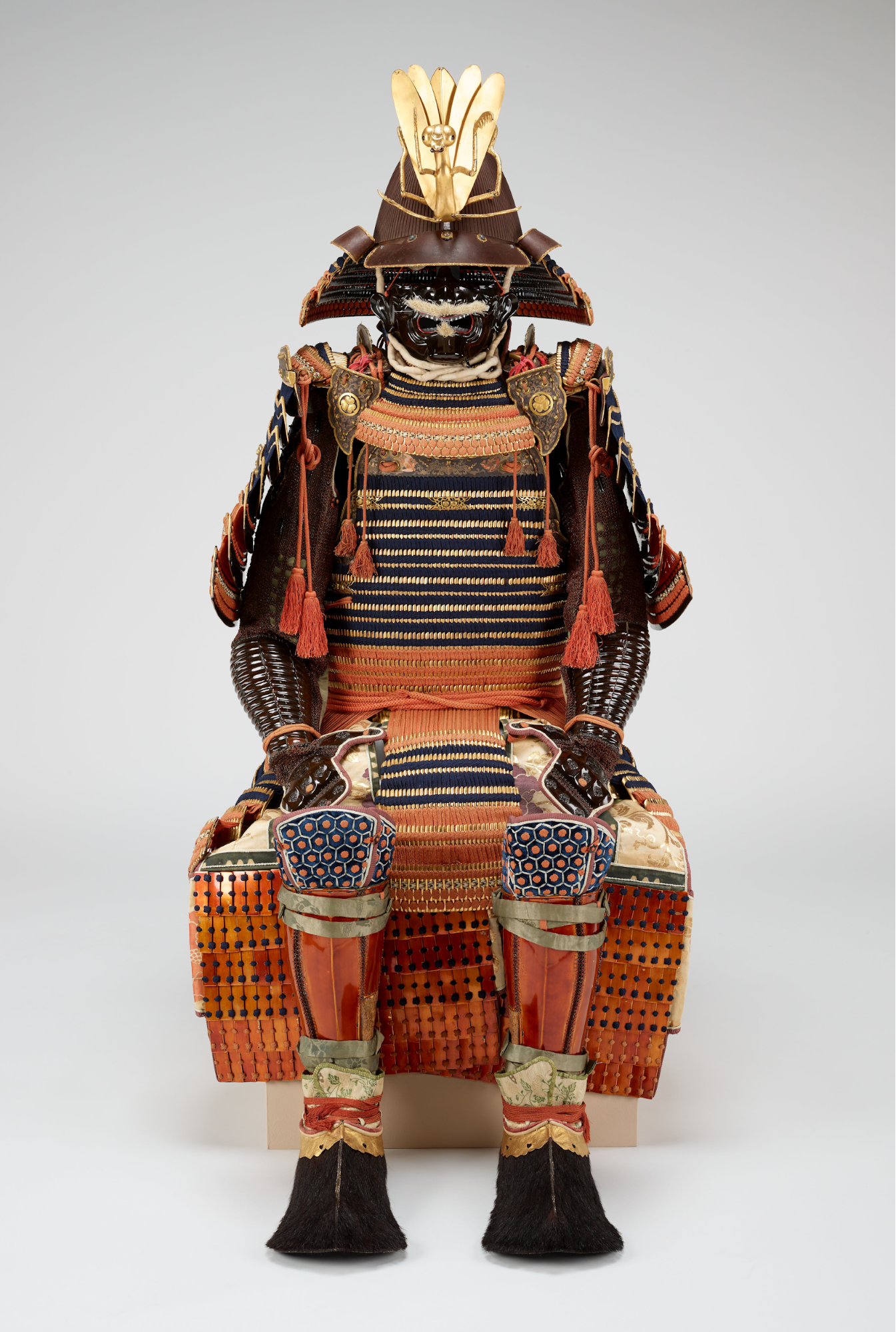 Together with their daimyo (feudal lords) they had a great deal of power and were legally entitled to kill commoners who paid them disrespect. The Samurai served their daimyo lords who lived in castles surrounded by vast  areas of land, but had to answer to the shōgun (military ruler).

The feudal lords were forced by the Shōgunate regime to leave their domains and spend part of the year in the capital Edo leaving their wives and children behind as hostages. The high expenditures to maintain their lavish residences in both places and the costly journeys from the capital to their distant districts escorted by several hundred Samurai were a financial burden which prevented the accumulation of too much wealth. This policy known as Sankin Kōtai prevented any individual lords from gaining too much power or waging war.

The Tokugawa shōgunate seized power in 1603 and ruled in Japan until 1868, choosing a policy of isolation (Sakoku) from the outside world, trade was strictly regulated and limited to the Dutch & Chinese at the port of Dejima.

During this period of relative peace the Samurai became more courtiers and bureaucrats rather than warriors.

In 1853 Commander Matthew Perry of the US Navy led his fleet into Yokohama harbour demanding the opening of the trading routes and diplomatic relations with Japan. A year later Perry forced the signing of the Treaty of Kanagawa allowing foreign commerce in the ports of Yokohama and Hakodate.
This treaty led to various internal conflicts in Japan that ultimately ended the iron grip of the Tokugawa shōgunate.

The Imperial family had very little power under the Shoguns, but in 1868 with the start of the Meiji (enlightened rule) era, the young Emperor Mutsuhito became Japan’s new constitutional monarch ruling under a parliamentary system. With the assistance of good advisors many from the Samurai class he started a programme of social and economic reforms incorporating new Western technology. Amongst these reforms he introduced a Western style national army, effectively removing the Samurai’s right to be the only armed force.
The Haitorei edict in 1876 prohibited the Samurai from the ancient custom of wearing swords in public, and in 1877 a revolt against Meiji Emperor took place with the Satsuma clan rebelling and losing against the government army at the final battle of Shiroyama, thus marking the end of the Samurai era. 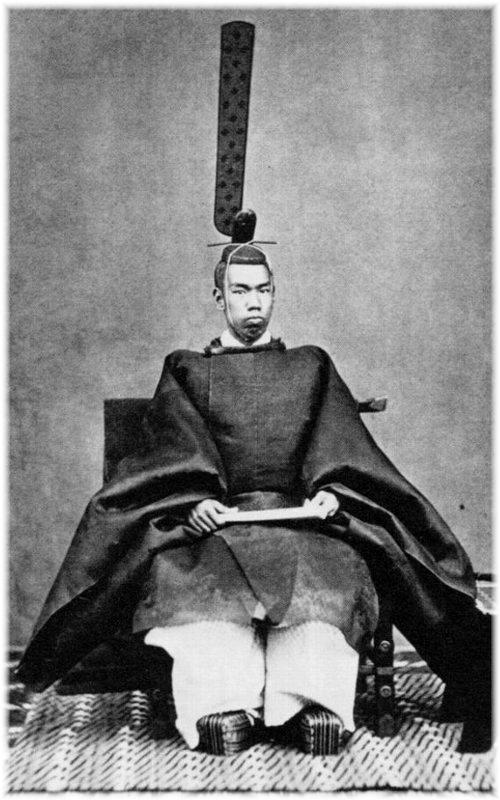 Before the Meiji period, Japanese craftsmen had been highly skilled carvers and metalworkers but mainly catered for the ruling class and the wealthy elite mercantile class.

The metalworkers who had previously worked to supply the fine sword fitting and armours suddenly lost their patronage due to the downfall of the feudal system.

The introduction of Western clothes replaced the traditional kimono, making the netsuke (the small toggle suspended from the belt) no longer necessary, although many carvers continued to produce netsuke, they began focusing more on the art form known as okimono (lit. an object of display) which found its best expression during the Meiji period (1868-1912).

In the 9 years since the restoration of the Meiji Emperor, the Japanese government actively promoted Japanese craftsmen and industrial designers at the First Domestic Industrial Fair held in Tokyo in 1877, and later participated at the International Exhibitions in Europe and United States with great success, gaining recognition by many collectors and scholars in the West for the excellent Japanese craftsmanship.

The metalwork craftsmen adapted their existing skills using complex alloys with gold and silver to manufacture Japanese design objects for this export industry.
Western demand grew for a wide range of pieces such as chargers, vases, boxes, bronze animals and Samurai warriors who proved popular with the Western clientele and in same way they continued to live on through these beautifully crafted pieces. 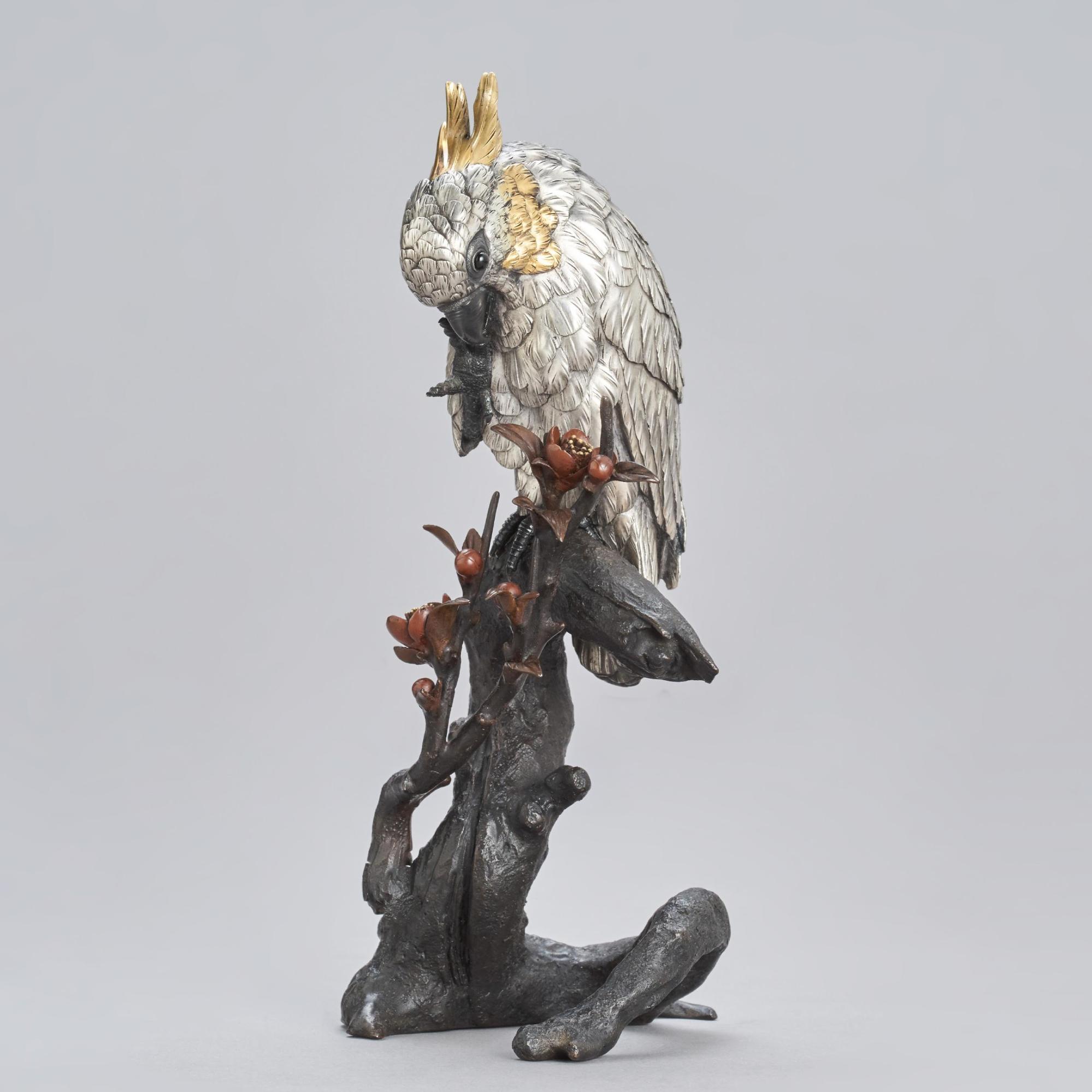 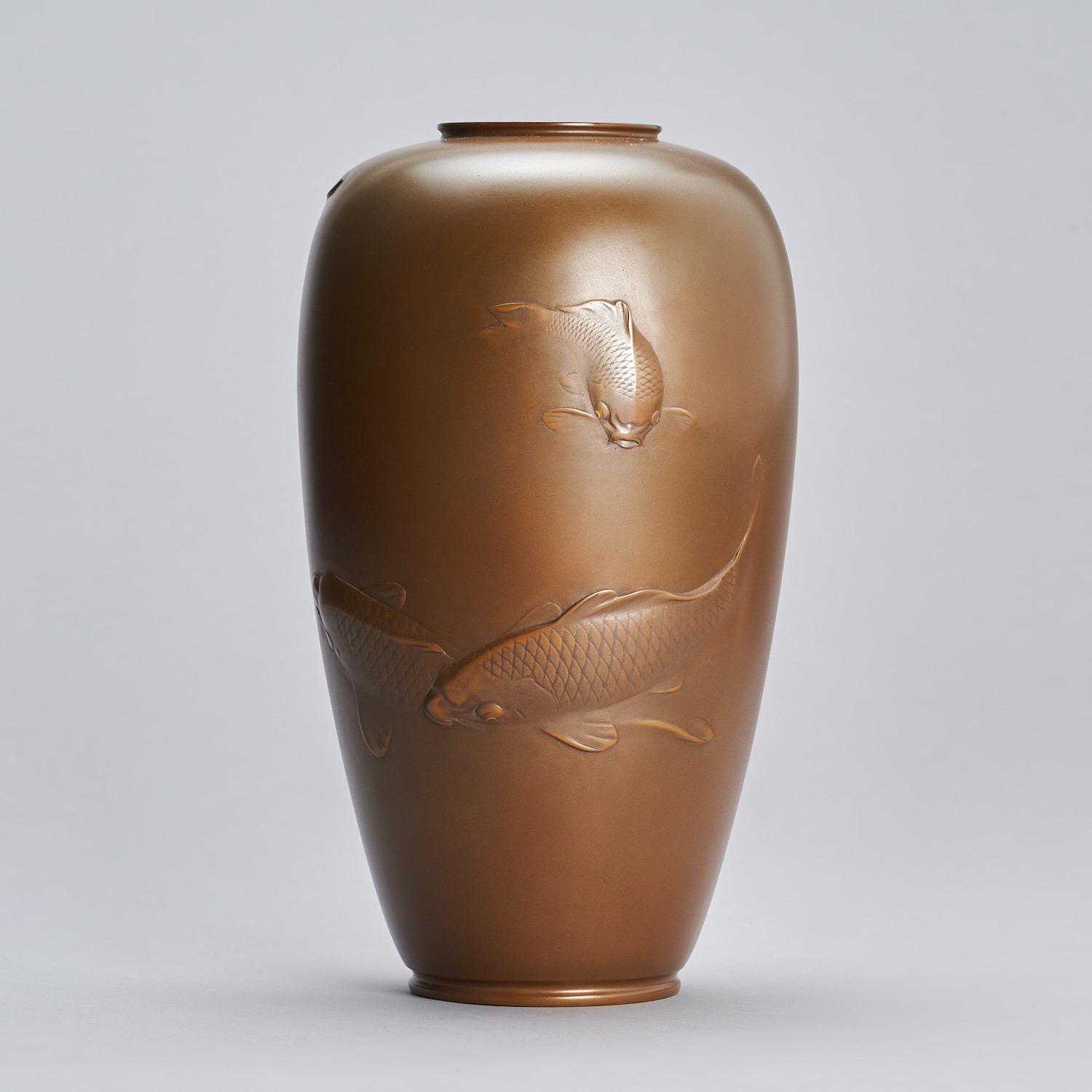 In the late 1880’s the fascination for Japanese arts and objects coming from the exotic land of the “Rising sun” started a fashion trend known as Japonisme.

In 1888 he founded a monthly journal ‘Le Japon Artistique’ and proved instrumental in raising awareness of the Japanese aesthetic. He introduced many designers and artists to Japonisme and organised many successful exhibitions of Japanese ukiyo-e, woodblock prints. The French Impressionists like Vincent van Gogh and his brother Theo, Renoir, Monet, Degas, and Gaugin were all influenced by the Japanese asymmetry, composition and boldness of the colours.

During the mid nineteenth century and the early part of the twentieth century several private collections of Japanese artefacts were assembled.

The English architect Charles Paget Wade (1883-1956) inherited from his father sugar estates in the island of St. Kitts in the West Indies. He started collecting at the age of 7, eventually amassing a spectacular eclectic collection typical of the Victorian’s taste; he assembled during his lifetime over 22,000 objects from around the world comprising furniture, paintings, clocks, porcelain and Japanese arms and armours.

In 1919 Wade bought Snowshill Manor in Gloucestershire to house his growing collection. In the Green room he theatrically recreated a daimyo’s camp with many fine suits of Samurai’s armour and related weapons. Amongst these exhibits there are many lacquer objects, bronzes, carvings, screens and cloisonné’ enamels.

In 1951 he donated his estate to the National Trust and continued to live there until his death in 1956.

The American railroad car manufacturer Charles Long Freer (1854-1919) started his collection in 1887, and made several trips to Japan between 1894 and 1911 purchasing over 2000 works of Japanese art.
He founded the Freer Gallery of Art which is part of the Smithsonian in Washington D.C.

William Anderson (1842-1900) a Scottish professor of anatomy and surgeon was a notable collector, scholar and author of several books on Japanese art. He moved to Tokyo in 1873 working at the Imperial Naval Medical College. It is here that his passion for collecting started.

On his return to England in 1880 he donated about 2000 woodblock prints to the British Library. He was honoured in 1895 as a knight commander of the Japanese order of the Rising Sun and as first chairman of the Japan Society, the body promoting cultural and educational exchanges between Britain and Japan.

James Lord Bowes a noted collector and philanthropist from Liverpool acquired a large collection of Japanese artefacts and became a passionate advocate of Japanese culture by writing many books on the subject.

Elements of Japanese aesthetics were adopted in European decorative arts, furniture, paintings and textiles. Many artists and designers were influenced by the Japanese style like the English architect-designer Edward William Godwin who incorporated in his furniture designs elements of the “Anglo-Japanese” taste and the Aesthetic movement of the late 19th century.

The designer Christopher Dresser travelled to Japan in 1874 and contributed significantly to the Anglo-Japanese movement that swept through the artistic circles in the 1880’s through his many books promoting Japanese art.

Today many people around the world enjoy Japanese craftsmanship of the Meiji period ensuring that these beautiful objects will continue to be appreciated and preserved for future generations.

Laura Bordignon is the author of ‘The Golden Age of Japanese Okimono’ (Antique Collectors’ Club 2010) an essential reference work for collectors, connoisseurs, dealers and scholars alike.